In September 1836 Columbia, now known as West Columbia, became capital of the Republic of Texas. This took place with the removal of the ad interim government here from Velasco. After the election called by ad interim President David G. Burnet, the first permanent government of the Republic went into operation here in Columbia in October. Inaugurated were President Sam Houston and Vice-President Mirabeau B. Lamar. Under their leadership the first duly elected Congress convened and the first Constitution of the Republic was ratified. Citizens of this vicinity served the Republic. Henry Smith of nearby Brazoria prior of this time has been the first Anglo-American governor of Texas, in the 1835-36 Revolutionary provisional government. In President Houston’s cabinet he was secretary of the treasury. Stephen F. Austin, colonizer and Father of Texas, was secretary of state; under the heavy demands of that office, his health broke and he died here on December 27, 1836. In April 1837 at the wish of President Houston, the seat of government was moved to more adequate quarters in the city of Houston.

To learn more about the events leading up to the birth of Texas and the role the area around West Columbia played, come visit us!

View nine of our sites (PDF).

The first duly elected Congress of the Republic of Texas met at Columbia, the new capital, October 3, 1836. The provisional government had been forced to move many times after the Texians declared their independence from Mexico on March 2, 1836 at Washington on the Brazos. the temporary capital was first established at Harrisburg on March 22, but in less than a month the officials were forced leave to escape Santa Anna’s troops. The government fled to Galveston just one day before Santa Anna arrived at Harrisburg to burn it down, and in a few weeks moved again, this time to Velasco. Facilities in both places were inadequate, so in July, ad interim President David G. Burnett called for a general election and ratification of the constitution, and decreed that the first duly elected legislature of the Republic of Texas would convene at Columbia on the first Monday in October, 1836.

Columbia was chosen as the capital for two principal reasons - there were greater facilities available than in any other town at that time and the early newspaper the Telegraph and Texas Register was there. Columbia had served as a seat of justice for the municipality of Columbia under Mexico, and boasted a number of permanent buildings built while it was the seat of the courts, including a large hotel, offices and a few dwelling houses and log cabins.

Two buildings served to house Congress and the principal offices of the government, and some officials and committees used adjacent log cabins. One of the buildings used by Congress was built by Capt. Henry S. Brown in 1832, serving as his family residence until his death in 1834. The other building used by Congress was a store built by Leman Kelsey in about 1833. The Kelsey building was destroyed by a storm in 1900. A state marker was placed near the original site by the Texas Centennial Committee in 1936. A replica of this Kelsey building was constructed in 1977. 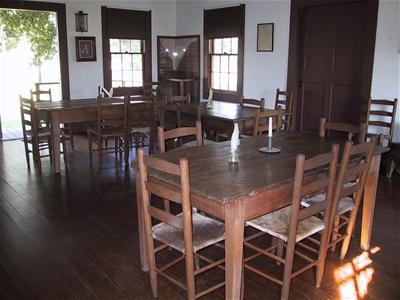 The room used by Congress was no doubt furnished with an odd assortment of tables and chairs hastily borrowed, many of the tables probably being kitchen tables. 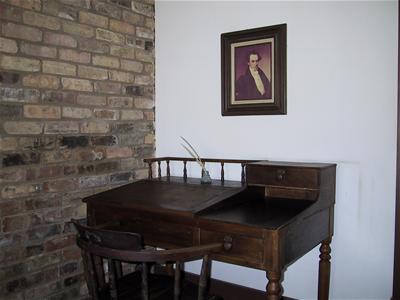 It was said that he worked and wrote far into each night, sometime spending the night there, so that it often served as his bedroom and office. The room was chilly and cold with no fire, and perhaps it was there that Austin caught the cold that led to pneumonia and his death in Columbia on December 27, 1836. 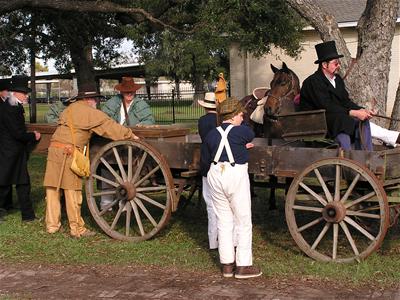 Austin lay in state at the capitol until December 29, when his body was escorted by a procession of his colleagues, the president and cabinet, to Belle's Landing. His body was then carried down the Brazos River on the Yellowstone to Peach Point, the home of his sister. There his body was met by an honor guard of the First Regiment, and buried at Peach Point with military honors.

The first Congress accomplished much. They ratified the constitution, appointed committees, provided for the army and navy, protection from the Indians, created a judiciary, postal department, a land office and established a financial system.

Housing continued to be a problem, so Congress voted to move the capital to Houston in 1837.